You may have heard the phrase “Car Crash TV” it basically means television programmes that show deliberately controversial, disturbing, or horrific material, that we don’t really want to see but we are compelled to keep watching.   It’s a bit of a sick phrase really when you think it through, in real life someone’s life has just dramatically changed, sometimes for ever, yet as by-standers we are drawn to observe it.

However, I don’t want to dwell on that too much…. But rather the number of car crashes that occur in TV programmes.

There were more in 2017, and as the Christmas storylines build there will be more to come!

This may seem a little excessive, and I can recall as a teenager saying to my Mum “Who’d buy a house on Brookside Close, with that many deaths, murders and robberies?!”

but sadly, in the scheme of things this isn’t far of the realistic truth, obviously not in every street but over the number of years these programmes have been on our screens it is possible to count up similar number of times we have witnessed or have friends or acquaintances involved in collisions.

As I have published before, here in the UK, we are good road users as a whole, we generally make our journeys without hiccups, bumps, crashes, fatality. We learn from others about good driving skills as well as bad, and so do our off spring. 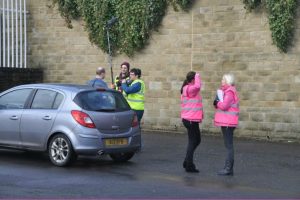 But we also get a lot of incorrect messages from the TV and here’s my point…. My children were watching a great programme on CBBC and learning about how important brake discs are in keeping our cars safe on the road, but then the children were in the wrong seats for their size and on other programmes they don’t even have seats. My children spotted it straight away (as expected in our house, considering Mums job!) and they said I should tell the BBC, so I contacted the production company who got back to me and we chatted about positive messages. I was really impressed with their attitude to make sure they get it right next time and even asked for our help.

And when any of us doesn’t get it right, then we all need to be told.

It isn’t Health and Safety gone mad, as I’m usually the first to rant about that, but it’s about positive role models, social responsibility and the unrivalled opportunity they have to teach us in true to life situations.  After all, imagine if Crossroads had never had the first wheelchair user or if EastEnders hadn’t had the first HIV story line?